Agree to Disagree – where the argument you had at the pub last Thursday becomes a well mannered discussion.

Calum Chambers and Luke Shaw emerged in the same Southampton team before securing big money moves to Arsenal and Manchester United. Both have debuted for England with the latter knocking on the door of the first team. Many believe the two are certain of big England futures but are they really good enough to rack up the caps? We argue whether they’ll reach 100 collectively – and this time there’s money on the line… 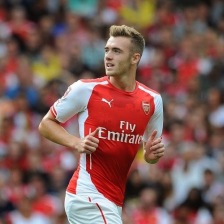 Yes – I still believe Calum Chambers and, particularly, Luke Shaw are destined to become England stalwarts. However I must admit I feel far less confident about this bet now than I did 12 months ago. When I first wagered a score on this I was willing to increase either the cap count or the bet itself. Wind forward a year and I fear that I may well be out of pocket. To be honest, this isn’t a great concern, we won’t find out the answer to this question for about another 10 or 12 years, by which point I may actually have found a job!

I am always an optimist when it comes to English players. Some may say I am too optimistic and let it cloud my otherwise flawless judgement. Winning 100 caps for your country is an achievement few reach; there have only ever been nine English centurions. Yet it becomes a different thing altogether when you combine caps between two players.

For example, if you choose to add Kieron Dyer’s and Owen Hargreaves’s individual totals you reach 75 caps, Stewart Downing’s and Wayne Bridge’s combined total gets you to 71. I guess the point here is that two players can win an awful lot of caps between them. I believe that come the World Cup in 2026, Luke Shaw and Callum Chambers, who already have nine caps, will have a accumulated a combined total of something between 85-100.

However, I fear that if I am going to win this highly coveted £20 then I will have to be heavily reliant on Shaw fulfilling his unquestionable potential. When Shaw joined Manchester United two summers ago he was considered by many to be the best young left back in Europe. His first season was average at best; questions about his attitude and his weight blighted his development.

A good pre-season led to Shaw starting the following campaign in fine form. He even looked to have cemented his place in the England team, starting the Euro 2016 qualifiers against San Marino and Switzerland in September, winning the man of the match award against the latter.

An unfortunate leg break against PSV Eindhoven in the Champions looked to have curtailed Shaw’s season. Nevertheless, the then England manager, Roy Hodgson, was not keen on giving up hope of him recovering for the finals. This was testament to how highly Shaw was rated by the England management at the time, and there can be little doubt that had Shaw not suffered that injury he would already be well into double figures.

Unlike Shaw, Chambers was not even a Southampton regular when he joined Arsenal for a deal reaching a potential £16 million in 2014. Chambers had only ever appeared in 25 Southampton games, with nearly all of those coming at right back.

Yet Arsène Wenger saw in Chambers a player who could be converted into a centre back. He was thrust into first team football earlier than he might have expected when injury struck Per Mertesacker. If there had been concerns regarding Chambers’ ability to adapt to his new position, then they were quickly quashed.

His early season performances led to a call up to the senior squad. He started the two October qualifiers against San Marino and Estonia and was even nominated for the European Golden Boy Award. It was a meteoric rise for someone who had played fewer than 40 senior games.

But sadly, Chambers could not build on his early season promise. Injuries and poor form restricted his appearances from January onwards. His second season was a similar tale as he appeared in just 22 of Arsenal’s 53 games. The signings of Shkodran Mustafi and Rob Holding in the summer threatened to restrict Chambers’ playing opportunities further. Realising he needed first team football, Chambers chose to join newly promoted Middlesbrough on a season long loan deal.

Shaw hasn’t played for England for 14 months, Chambers, not for over two years. Yet I still hold faith in their ability to return to the international fold. Shaw has already been called up to the England squad this season, for Sam Allardyce’s one and only game in charge, yet he did not feature. An indifferent start to the season with United, and the odd run in with José Mourinho have meant that he has not always been first choice for United.

Despite this I can’t envisage a situation where Shaw goes off the boil. I think it’ll be a matter of time before he regains his England place. When fit he is undisputedly the best English left back. Others like Danny Rose and Ryan Bertrand have come in and impressed but neither are of the same class as Shaw.

For Chambers the situation is a little more complicated. In order to get into the England squad, he needs to ensure that he returns from his loan spell after having got a solid run of games. He also needs to commit to a position. England are blessed with good quality right backs so if Chambers is going to become an England regular it will almost certainly be at centre back.

No – This Agree to Disagree really did start with an argument in a pub, evolved into a bet, and quickly became a mild obsession. I should also add I have no real aversion to the two Southampton graduates and would happily accept either nodding in a winner in the final of Euro 2020.

The critical part of me thinks they simply aren’t good enough. A more rational part thinks there’s some hefty competition at full-back (admittedly less so at centre-back) and mustering an average of 50 caps each will be no mean feat. There’s been plenty of talent from the Saints’ academy, but I think Shaw and Chambers were snapped up for big money far too soon creating a buzz they’ve so far struggled to live up to.

Let’s start with Shaw – a man many think will get close to 100 caps on his own. Shortly before his 19th birthday he signed for Manchester United for a figure of around £30 million. Shortly after my 19th birthday I turned up to Reading University football trials with glow paint in my hair. However, I’ll refrain from throwing a price tag argument into the mix. Shaw wasn’t worth £30 million but in this Andy Carroll/Raheem Sterling/Yannick Bolaise/Paul Pogba environment no footballer represents true value for money. I won’t be using his lofty transfer fee as an argument against his obvious potential.

But how much potential had Shaw actually shown prior to his move? It was difficult not to have some love for his Southampton team with perhaps only Nigel Adkins having any real gripe with Mauricio Pochettino’s success. Shaw had played 60 Premier League games by the age of 19 but was he delivering standout performances? My memory is of another terrific campaign for Rickie Lambert, the emergence of Jay Rodriguez and Adam Lallana, and rocksteady displays by Dejan Lovren and the underrated Jose Fonte. At the end of the 2014 season a fallen Manchester United were eager to replace the excellent Patrice Evra and threw their weight into the transfer market to pick up Southampton’s exciting youngster.

They say big club players have a greater chance of getting the nod and I felt Luke Shaw transitioned from ‘promising young left-back’ to ‘future England centurion’ far too quickly (he’s played just five times for the England U21s). His first season at United was promising – if unspectacular – but he was dealt a huge blow in September 2015 when suffering a horrible leg-break. I feared the worst for Shaw and the injury seemed so horrific I was happy to call it quits on the bet. His absence was felt in Louis Van Gaal’s stuttering side and everybody was excited for his return. People were, if anything, too excited for his return (a similar story to Jack Wilshere’s) and believed he would magically comeback to save both club and country. Shaw’s a good player but let’s not pile the weight of the nation on his shoulders just yet; he’s got to get into Jose Mourinho’s good books first.

In order for Shaw and Chambers to collectively reach 100 caps the United left-back may need to receive upwards of 90. I just don’t think Arsenal’s Chambers – plucked from Southampton for £16 million – has an England future. He’s currently on loan at Middlesbrough and its feasible he spends the better part of his twenties plying his trade in the lower-mid table (who remembers Justin Hoyte?). In Chambers’ favour is his dual-positional status functioning both at right-back and centre-back. However, this could also be his greatest flaw and he needs to become a specialist; my vote would go for centre-back. The first obstacle to any young English centre-back is squad stalwart Phil Jagielka and anyone vaguely promising deserves to displace the aging Everton captain.

At left-back Shaw’s competition is far greater with Danny Rose the current first choice. It’s surprising to think Rose has locked down a starting place with such authority. It doesn’t seem long ago that he was flapping about in Sunderland colours but a return to Tottenham has seen the 26 year-old hit some real form and he’s consistently one of England’s better players. I’m confident he’ll block out left-back for another two years. Aaron Cresswell is another left-back who’s received a recent call-up following an eighteen month period peppered with good games. Shaw champions both in the age department but must make headway into both the Manchester United and England first XI before the next hot prospect emerges; full-back is a position England has a recent history of overflowing in talent.

Collecting 100 caps is a big ask. Assuming Chambers struggles to make an impact, Shaw will need to have a huge career. John Terry got 78 caps and Rio Ferdinand 80. Glen Johnson started young and will end on 54. Gary Neville was a top full-back and can count just 85.

I’m confident they won’t make it.