The top and bottom of the Premier League has been decided! Michy Batshuayi ended the title race with his second Premier League goal of the season. At the other end of the table Hull City fell apart against Crystal Palace giving their fans a very disappointing end to a spirited survival fight. A huge win for Liverpool away to West Ham means they are now just one home victory away from a return to Champions League football. Here’s our penultimate five-a-side team of the week. We finally got Sanchez and Coutinho on the same pitch… 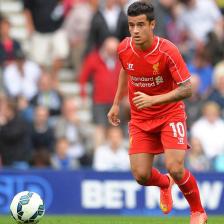 Despite a slump during March and early April, Swansea would be comfortably in the top ten based on their results under Paul Clement. He eventually found a way to remedy their woeful defensive record and Fabianski has upped his game in recent weeks. As dreadful as Sunderland are, they were still able to test the Pole last weekend only to find he had all the answers. Swansea have confirmed their place in the Premier League for another year and Fabianski should keep his job as their number one.

Roll up, roll up, pick your favourite Chelsea defender. Azpilicueta has been very effective this season and a revelation at centre back. He is comfortable on the ball and wonderfully versatile. His key contribution against West Brom on Friday came in the final third when he got round the back to steer a ball into the waiting Batshuayi; a worthy TOTW call-up for one of the league’s best defenders.

Liverpool have won ten of the twelve games where Philippe Coutinho has scored or assisted a goal. Simply put, when the Brazilian performs Liverpool usually win. They ran away with it on Sunday dispatching West Ham 4-0 at the Olympic Stadium – a result which will have a huge impact on their pursuit of the top four. The Reds have struggled away to West Ham recently and would have been glad to see the back of the Boelyn Ground. The little Brazilian seemed to benefit from the presence of a recalled Daniel Sturridge and you wonder where Liverpool would be if the two had played together on more occasions this season. If only, if only…

You can also wonder where Arsenal would be without Alexis Sanchez. The Chilean’s shown himself to be a curious character at times this season but his performances on the pitch have never wavered. My own, unpopular, opinion is that Sanchez is the best footballer in the Premier League. He certainly looked it when dragging Arsenal through back-to-back wins against Stoke (last weekend) and Sunderland (last night). His finishing is electric and he’s now just one behind Lukaku in the race for the Golden Boot. The two will share a pitch this Sunday…

Last May Leicester were celebrating a miracle. This time around they can at least applaud a stunning goal by the often overlooked Okazaki. They made a game of it against Manchester City proving they really are far too good to go down. The second half was an unpleasant watch for Pep Guardiola after the Japanese international had had fired an acrobatic volley past Claudio Bravo. He rounds off our team this week.