This is the most controversial five-a-side formation I’ve ever picked; however, I am confident that it would work well. There were only six Premier League games this weekend. West Ham and Everton shared the spoils in a disappointing nil-all draw at the London Stadium. Swansea and Hull both claimed vital home wins over Stoke and Watford respectively. Bournemouth’s 4-0 win over Watford was their second biggest win of the season and moved them to within touching distance of Premier League safety. On Sunday, Manchester United continued their top-four charge with an impressive two-nil win at Burnley, while Crystal Palace’s Christian Bentéké came back to haunt his old club, scoring twice in a 2-1 win over Liverpool at Anfield. 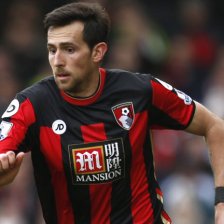 Jakupovic has been outstanding ever since Marco Silva got the Hull City job in early January. Prior to then he had been playing second fiddle to Scotland international David Marshall in the Tigers net. Since displacing him, the ex-Switzerland international has not looked back. Hull’s 2-0 win over Watford was as important as it was impressive. After having Oumar Niasse harshly sent off before half-time, Jakupovic had to be at his best to keep Watford’s strikers at bay. There were sixteen attempts on his goal, and he dealt with 100% of the crosses he came for. It really was a commanding display.

I really like Joel Ward. I think he is as solid as they come. Unspectacular, reliable and someone who you would generally want in your side. This wasn’t necessarily his finest game in a Palace shirt, but his contribution was certainly important as The Eagles won at Anfield for a staggering third year in a row. The win took Ward and his Palace teammates up to 12th in the league and, crucially, seven points above Swansea in 18th.

Another player who deserves a game in our five-a-side TOTW. Daniels has been a near ever-present for Bournemouth this season, featuring in 30 of their 34 Premier League games. His goal against Middlesbrough was his fourth of the season, and it sealed a vital win for The Cherries. Daniels and his Bournemouth team mates have endured a miserable 2017 – winning only three of their 15 Premier League games since the turn of the year. Saturday’s comprehensive win over their fellow Premier League strugglers took them up to 38 points – just two away from the magic 40 point mark.

I still think Swansea City will go down, however this won’t be down to the lack of effort of their players. They were absolutely brilliant in their 2-0 win of Stoke City at The Liberty, with Tom Carroll being the pick of the bunch. The young midfielder scored the decisive goal, albeit via deflection, to seal three priceless points for the Swans. He has been a revelation since signing from Tottenham for £4.5 million in January. If, as expected, Swansea go down at the end of the season, Carroll certainly won’t be short of suitors.

I am never going to be convinced by Bentéké. He is big, strong and deceptively quick, yet he lacks the finesse to be a really top class striker. Nevertheless, his performance against Liverpool on Sunday afternoon was absolutely first class. Jürgen Klopp’s men could simply not handle his aerial prowess. It was clear via his celebrations that Bentéké enjoyed his return to Anfield. He made a point of running towards another Liverpool outcast, Mamadou Sakho, after scoring the equalising goal; a move that did not sit well with the Liverpool fans.  He now has 14 Premier League goals this season. His best return since his first season in England with Aston Villa.