*DISCLAIMER – This is not a real story.* 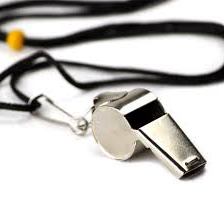 A recent study into the physiological and psychological state of elite referees has revealed that they are not actually homo sapiens.

The study, conducted by the University of Research, had been due to finish last season, but due to unexpected delays, and the emergence of a new specimen in the shape of Keith Shrowd, it has only been completed this week.

Among the findings revealed in the 352-page report is the astonishing revelation that referees are actually immune to normal human emotions such as guilt and compassion. While the report is actually too boring to read in its entirety, someoneonthepost.com can exclusively reveal that some referees do actually have eyes in the back of their head.

Conor Cassidy, chief professor at the University of Research explained – “A lot of the referees that took part in this study wished to remain anonymous. They were as keen as us to find out as to why they were so despised by a significant proportion of this largely civilised society we live in. We are unable to give answers to all the questions, but we were particularly interested in finding out why some referees seem not to get affected by 40,000 people shouting ‘You’re a w*nker’ at them.”

Jonathan Moss from Sunderland, one of the few referees who did not mind us revealing his identity, told us while actual human beings may go to a variety of religious books for guidance in life, he and his colleagues actually choose to consult The Laws of the Game, a book published by FIFA, a cult with suspicious financial dealings. This book acts as a moral compass for referees and enables them to get through menial daily tasks.

Moss explained to us that the book even offered advice on the colour of tape used to ensure socks do not fall down below your shins. “Before reading The Laws of the Game, I used to erroneously pair bright yellow socks with black tape. According to the book, not only is it a fashion faux pas, but it is also illegal!”

Mark C, a referee who did not want us to reveal his identity, told us what it was like to be marginalised by society. “I get some sort of macabre satisfaction from people shouting abuse at me. Others drink, others take drugs – some do both. But I like to stand in the middle of a field and have people call me names and tell me I need to go to Specsavers. The only time when I wish I wasn’t a referee is when I go to my local newsagents. Quite often I am greeted by the local youths who inform me that their step-dads are going to ‘Kill me!’ or something equally awful.”

Mark C’s story is a common one. The study shows that most referees seem to get some sort of sadistic enjoyment out of ruining thousands of people’s weekends. “I once gave a penalty because I was bored.” This frank admission came from Mike D. “Yeah, I was standing there watching this dour 0-0 draw and thought ‘F*ck it! I am going to give a penalty.’ I am not sure if it was in the box, but it definitely wasn’t a foul. Who really cares?”

With more details surrounding the study expected to be released in the coming weeks, Conor Cassidy anticipates that referees will continue to suffer. “Referees are much like parking attendants; nobody likes them, everyone wishes they didn’t exist, but unfortunately we need them.”