As the seasons tick by at frightening pace, we often lose sight of our Premier League constants. We’ll be left watching Match of the Day asking ‘Crikey, when did Phil Bardsley turn 31?’. Some players are always in the right place, at the right time, at the right club and continue to rack up Premier League appearances. Here are six players who probably have more than you thought. Starts, cameos and stoppage time run-outs… they all count. 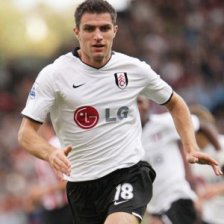 After a bright start to his career at Tottenham, Luke Young moved to Charlton Athletic and blossomed into one of the best young left-backs in the country. He became part of the Young-Fish-Costa-Fortune backline and was a mainstay through to the 2005/06 season by which point manager Alan Curbishley had added the likes of Matt Holland, Darren Bent and Dennis Rommedahl to the squad. Curbishley left, Charlton wobbled and a mishmash of Iain Dowie, Les Reed and Alan Pardew took Charlton to a 19th place finish. Young secured his own Premier League survival through a move to Middlesbrough and after one season upgraded to join Aston Villa. It was at the Villains that his career began a very slow nosedive. He was now very much out of the England picture but soldiered on for five more years of intermittent Premier League football (the last of which came in QPR colours). Young amassed a whopping 378 appearances – that’s ten more than Scott Parker and twelve more than Roy Keane.

Aaron Hughes has made more top division appearances than the likes of Ashley Cole and has over 100 more than Kolo Toure. He even champions ageless goalkeepers Shay Given and Brad Friedel. Before we start poking fun at his unmemorable career, it’s only fair to applaud this feat of longevity. He played in decent Newcastle and Fulham sides, stayed almost injury-free for twelve years and was unfairly out-shone by centre-back partners with bigger names. From the 1999/00 season through to 2010/11 Hughes failed to play 30 Premier League games on just three occasions, hitting maximum apps in two Fulham campaigns. In his final three years at Fulham he navigated safely over the 400 mark yet I recall approximately no pub discussions featuring his name. He hardly ever scored – which never helps – but never made the headlines for doing the wrong things either. In his old age he tumbled into the Championship but completed a century of caps for Northern Ireland at Euro 2016.

Swansea’s Routledge has made 266 Premier League appearances (at the time of writing) and could hit 300 before his unspectacular career wraps up. After starting every game for promoted Crystal Palace in 2004/05, the Englishman made a career-stalling transfer to Spurs and played just 44 more times in the next four years (mainly through loan moves to Fulham and Portsmouth). Swansea snapped him up in the summer of 2011 and Routledge relaunched his career as a Premier League starter. He’s featured heavily in the last five campaigns and continues to make regular appearances in a Swansea side that have failed to improve their wide options. That’s not to say Routledge is a bad player – he presents an honest challenge to any full-back he’s paired against – but despite his 250+ appearances he’s never been more than fleetingly considered for an England cap.

Steed Malbranque was wicked, right? The Frenchman was always a solid Fantasy Football choice with his classy displays for Fulham containing plenty of dangerous crosses and a fair share of successful strikes (he got six goals a season from 2003 to 2006). Malbranque’s talent saw him claim 40 Premier League assists putting him just ahead of the likes of Robert Pires, Emile Heskey and, erm, Matt Etherington. His transfer to Tottenham wasn’t exactly a roaring success and he grinded out 100 league games for Sunderland that pretty much nobody outside of Wearside can remember. Deep down I think we all quite liked the uncapped Frenchman and it was a shame to see him leave his adopted nation for St.Etienne in 2011. To put Malbranque’s tally into perspective, Sergio Aguero won’t reach 336 games until the 2021/22 season.

Wow, Lee Bowyer came dangerously close to joining the elite group of footballers with 400 Premier League appearances. Much like others on this list, Bowyer had a solid grounding from a young age as a first team member of a successful Leeds United team. You might be more shocked to find the Camden-born midfielder netted 35 times in his six full seasons at Elland Road. He soon garnered a reputation as a footballing thug and 100 Premier League bookings prove there’s no smoke without fire. He battled on – often literally – with mixed spells at Newcastle and West Ham. Despite his obvious shortfalls, it’s fair to say he did an underrated job in the top flight. He dipped down to the Championship before returning with Birmingham City for two seasons in which he arguably played his best football in a decade. Nevertheless, I still find myself asking: how and when did Lee Bowyer sneak to 397 Premier League games?

Narrowly missing out on the 300 club, Charles N’Zogbia has never really lived up to his teenage potential. Whilst researching for this list I stumbled across plenty of reminders of just how exciting N’Zogbia was when he burst into the Newcastle first team. The Frenchman was a dynamic and exciting player and endeared himself to the Toon Army with a succession of fine goals including a free-kick vs. Sunderland. At that point, if you told me he’d make nearly 300 Premier League appearances I’d have imagined a career at the very top level. N’Zogbia’s form fizzled out under new Newcastle management but a move to Wigan Athletic saw him reinvigorated and some sparkling performances would follow. Deemed too good for relegation-bound Wigan, N’Zogbia moved to Aston Villa in 2011 where his career ground to a halt. Apparently he played 80 times for the Midlanders but you’d do well to remember those performances. He’s been hit by plenty of injuries but they haven’t saved him from harsh judgement by both fans and the media. He’s still only 30…