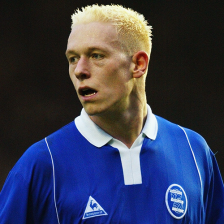 1. Paul Robinson, November 2000
Remember Paul Robinson? Remember how he let Gary Neville’s back pass deceive him against Croatia in Euro Qualifying? Long before he began grinding the years away at Blackburn, Paul Robinson was Leeds United’s number two goalkeeper and a highly exciting prospect. His Player of the Month award is slightly curious as Leeds, with Robinson standing in for Nigel Martyn, won just two of their four games that November and one was a 4-3 home victory over Liverpool. Robinson’s only clean sheet came in an impressive 1-0 victory over Arsenal at the end of the month and this, along with his tender age of 20, would have stuck in the mind when voting came around.

2. Marcus Bent, March 2002
Sandwiched between a pair for Premier League heavyweight Ruud Van Nistlerooy, Marcus Bent claimed the Player of the Month award from January 2002. At first this may seem a questionable choice. Bent was playing for the Ipswich side hit hard by a ‘Second Season Syndrome’ of sorts. Following their stunning fifth place in 2001, Ipswich had the most peculiar of campaigns. They won just nine league games in total and seven came in an eight game period from December to the end of January. There were just two victories before Christmas and one after February 2nd. Bent was signed in the mid-season window and was instrumental in the side’s temporary upturn in form. He earned his award by finding the net in four straight games and helping the Tractor Boys to nine important points including one-goal victories over Tottenham and Fulham. Ipswich were eventually relegated and Bent would be nowhere near as influential for the rest of his career. Nevertheless, for a short time at the start of 2002 he was the Premier League’s most important striker.

3. Mikael Forssell, March 2004
Birmingham City fans will hopefully remember Mikael Forssell for the 17 goals he scored on loan in the 2003-2004 season, rather than the 13 he bagged in the next four combined. Fresh from picking Arsenal’s Edu the previous month, the mystery panel went for another underdog pick with the (occasionally) prolific Finnish striker. In all honesty, there was nothing surprising about Forssell’s selection that March; three in two games against ‘Boro (how the fixture list worked that season I’m not sure) plus a brace against Leeds and one more at home to Bolton. With six goals in the month he was an obvious candidate for the award. Unfortunately, he scored just one in the next eight games and Birmingham failed to win, falling four places to tenth.

4. Phil Jagielka, February 2009
Finishing 5th under David Moyes, Everton fans may look back on the 2008/09 season and wonder how they’ve ended up flagging in the mid-table for the last two campaigns. Liverpool took Manchester United to the wire that season and Everton plugged away for a fifth place finish, losing just five games from October onwards. Over the winter Everton went on an extraordinary run keeping nine clean sheets in twelve games. An integral part of that backline was 26-year old Jagielka who was delivering on his potential and had not yet become Captain Fantastically Average. Conceding no goals and helping to earn seven points, Jagielka was awarded – and probably deserved – February’s Player of the Month. In a season starring Frank Lampard, Fernando Torres and Cristiano Ronaldo, it was nice to see good defending recognised.

5. Johan Elmander, November 2010
Bolton Wanderers had one of those seasons in 2010-2011. The ones where you lose just two of your opening fifteen league games and then eight of your last ten. Back that November Owen Coyle’s side were pretty electric scoring fourteen goals in their five league games (W3 D2). They were a front-loaded side with Kevin Davies supported by Martin Petrov, Ivan Klasnic and Johan Elmander (later joined by Daniel Sturridge). Elmander’s the sort of player that would end up at Real Madrid on your only game of Championship Manager 2002 that lasted longer than one season. In real life, however, he wound up a European journeyman who, to his credit, scored a handful of goals at each of his clubs. I’m still not quite sure how he ended up Premier League Player of the Month but it would likely have something to do with his two goals in a 5-1 romp of Newcastle United.

6. Peter Odemwingie, September 2010, April 2011 and February 2012
This one hits hard. Whilst buzzing around the final third for a middling West Brom side, Peter Odemwingie took home three Player of the Month awards. That puts him level with Gareth Bale and Ruud Van Nistlerooy, one ahead of Fernando Torres, Ryan Giggs and Robbie Fowler. Meanwhile, Eden Hazard and Riyad Mahrez have none (as of the start of the 2017 season). Odemwingie scored thirty goals for West Brom in clusters of good form. His first award came after scoring in a 3-2 victory over Arsenal with WBA taking a 3-0 lead and hanging on for back-to-back league wins. It’s worth noting Dimitar Berbatov had scored a superb hat-trick against Liverpool the week earlier. Odemwingie did go on to have a good season and when scoring in four straight games in April 2011 he grabbed his second award. His form in February 2012 was undoubtedly impressive featuring a hat-trick against rivals Wolverhampton and two more against Sunderland. In the three months the Nigerian won the award he scored eleven goals in twelve games. He got 19 in his other 75 for the club; a true master of both finding and losing form.